You are here: Home » Support » Blog » 3 Secrets About Manual Correction of Sheet Metal Plate That Nobody Will Tell You 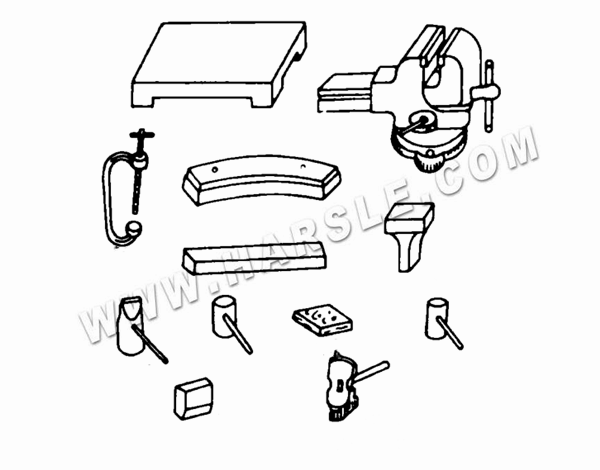 Manual orthopedics is the use of hand tools to strike a specific part of the workpiece on the work platform, and by "retracting" and "releasing" the blank, the metal in the tighter part is extended, and finally, the fiber length of each layer tends to be consistent. Achieve orthopedically. To correctly realize the corrective operation, and to complete it in the shortest time and with the least hammering, the operator is required to accurately determine the deformed part and grasp the necessary operation essentials.

"Loose" and "tight" are the names for the unevenness of the steel plate due to the difference in local stress caused by the cold work. Traditionally, the material at the deformed area is stretched and the uneven relaxation state is called " Loose"; but the undeformed part where the length of the material fiber remains unchanged and in a straight state is called "tight". When correcting, loosen the tight part or tighten the loose part, and get the same elasticity to achieve the correction purpose, and beat the tight part to release it. The hardness of the hammer or clapper (iron) used should not be higher than that of the material being corrected. Rubber, wood, bakelite, plastic, aluminum, copper, and low-carbon steel are commonly used materials.

Before the correction, the deformation of the steel plate should be checked. The "loose" or "tight" of the steel plate can be judged by experience: the area that looks convex or concave and can fluctuate with the movement of the pressing force is a "loose" phenomenon, and the area that looks flat is the "loose" phenomenon. "Tight" phenomenon. An uneven thin steel plate is placed on a non-porous platform. Due to its poor rigidity, some parts are tilted, and some parts are attached to the platform. If the thin plate is flat around and can fit the platform, but the middle is raised, that is, the middle is loose and the sides are tight. Therefore, you must use your hand to hammer around, and the direction of the hammer should be from the inside to the outside. The point of the hammer should be even and denser as it goes outwards, and the hammering force should be larger so that the surrounding materials can relax and the bulge can be eliminated, as shown in Figure (a) As shown; if the middle of the thin plate is attached to the platform, the periphery is twisted into a wave shape, and the periphery is loose at this time. The periphery can be beaten with a rubber band to shrink the material. If there is a margin around the sheet material, the edge trimmer can be used to shrink the periphery, and the margin can be cut off after trimming. When correcting, punch the middle, the punching direction is from the outside to the inside, and the punching points must be even and denser as you go in, and the punching force will be greater, as shown in Figure (b).

Some steel plates are deformed, and the tightness is difficult to distinguish for a while. You can perform circular hammering from the appropriate part inside the edge to make it irregularly deform into a regular deformation, and then relax the tight part. In case of the severe local bulge and it is not convenient to relax the surroundings, you can first heat the severely bulge to make the bulge shrink to be basically flat, and then perform cold work correction. When correcting, the workpiece should be turned over and be beaten on both sides.

Therefore, the following two methods can be used to correct:

● Directly hit the bumps, the punching force is greater than the yield point of the material so that the bumps are forced to be compressed or plastically deformed and flattened; 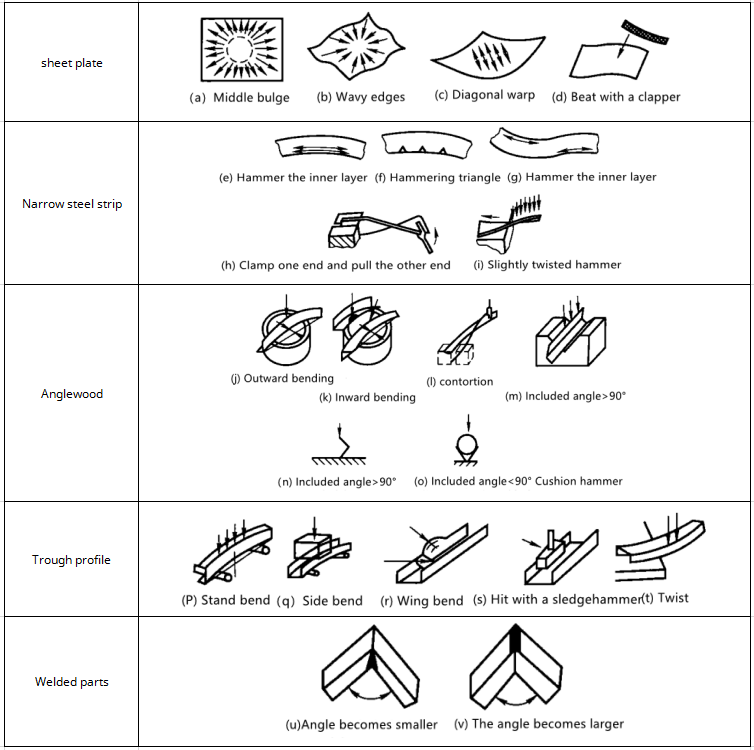 There are many shapes of sheet metal parts, and the deformations produced during processing are also various. For different deformations, the methods of manual correction operations are also different.

● Correction of parts with holes

For parts without reinforced edges and lightened holes, since the periphery is prone to looseness after quenching, rubber bands are generally used for correction to shrink the material, as shown in Figure (a). If distortion occurs, place it on a rubber pad and hit the distortion with a hammer, as shown in Figure (b). When the above method can not be eliminated, you can beat it along the circumference of the hole.

Without reinforcing edges, lighten the correction of hole parts

For parts with reinforced edges, lightning holes, and convex-edge holes, after this kind of part is quenched, the hole around the hole becomes "tighter" relative to other parts. The reason is that the material around the hole is formed during the forming process. During compression and quenching, the strength of the reinforced side is greater, and the hole is not easy to deform, but other parts of the part may cause greater deformation and distortion. When correcting, put the parts on the tire mold and beat them evenly around the hole, as shown in the figure.

For parts with reinforced blind holes and ribs, the correction is basically the same as the above situation, see the figure. But do not punch the hammerhead on the whole surface or the reinforcing rib during the correction, otherwise, it will cause the loosening of the material and increase the difficulty of the correction work.

With reinforced edges to reduce the correction of hole parts

● Correction of skinned parts The surface quality of skinned parts are generally required to be very high. Except for defects such as scratches, there should be no more obvious marks. Therefore, the surface of correction tools, such as hardwood hammers, aluminum hammers, rollers, and platforms, should be smooth, and the surface roughness is generally about Ral. 6μm. Use a hardwood hammer as much as possible when correcting. When using an aluminum hammer, you can apply oil for hammering, so that there is an oil layer between the processed contact surfaces, and there is basically no hammer mark after the hammering.

Thicker single-curvature skin, when there are small bumps or the edge is not straight, can be padded with hard rubber to correct it. For double-curved skins, rollers are generally used to roll the "tight" areas, and hammers are used only when the area is small or cannot be rolled.

The roller used for rolling is as shown in the figure. Generally, the upper roller is flat, and the lower roller must be determined according to the parts being rolled. When the part has a large curvature or needs to be rolled inward, a pointed roller should be used, and a flat roller should be used when the curvature is small or outward. Scroll wheel. The degree of rolling of the roller, generally when the stretch is large or the material is hard, the roller should be pressed tighter and the roller should be released faster. On the contrary, when the amount of rolling is small or the material is soft, the roller should be pressed lightly. In the vicinity of the rolling area, appropriate light rolling should also be carried out to eliminate the influence of the rolling position on the surroundings. For parts with holes, the hole should not roll or roll as little as possible, otherwise, it is easy to "lose". If the deformation is large, it is best to open the hole after correction.

The longitudinal anti-concave of the part can be padded with gauge iron, and the wood tip can be corrected. The wood tip angle is 0.5° smaller than the part angle, and R is consistent with the part, as shown in the figure.

When the angle of the flange is too large, you can use a wooden tip to adjust the radius of the inner corner of the bend as shown in figure (a); when the angle is too small, hit R on the top iron to increase the part angle, as shown in the figure.

When the angle of the flange is too large, you can use a wooden tip to adjust the radius of the inner corner of the bend as shown in figure (a); when the angle is too small, hit R on the top iron to increase the part angle, as shown in the figure. 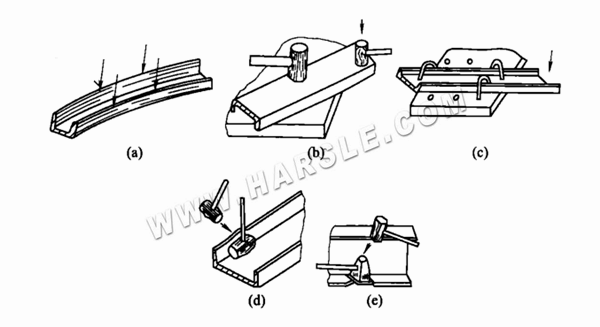 Among them: the bending deformation of the channel steel shown in Figure (a) is to place the bent part on two supporting points, and the method of hitting at the bend is adopted. The hitting point should fall at the root of the profile steel facade. The hitting force depends on The deformation situation changes at any time; the channel steel shown in Figures (b) and (c) is twisted and deformed. The correction method is to use an external force to press or fix it with a large bending card as shown in the figure, so as to concentrate the force and improve the correction effect. Reduce elastic vibration during work; Figure (d) and Figure (e) show local deformation. The correction method is to use a sledgehammer (or shim) to support the deformed part on the inner side and strike it with a hammer on the outer side, which is beneficial to Eliminate distortion faster.

For welded parts welded with various cross-sectional shapes, due to the influence of thermal expansion and contraction, there are different degrees of deformation, especially in the absence of welding fixtures, the deformation is even greater. To make the welded parts reach For quality requirements, manual orthopedics are often used.

Correction of the angle of T-shaped weldment

In most cases, the T-shaped welded parts are welded with the ends of the T-shaped iron in the transverse direction of the L-shaped iron and are perpendicular to each other. ∠B and ∠B1 are complementary angles, as shown in Figure 5-19. If ∠B is less than 90° after welding, you can hit the shadow area of ∠B to increase ∠B and decrease ∠B1 accordingly until the two angles are equal.

Correction of angle of T-shaped weldment

Correction of the rectangular frame

After welding, the AD and BC sides of the frame have a bilateral bending phenomenon. You can stand the frame on the platform, with the outer flange AD facing upwards, pad the upper backing plate at both ends of the BC side, and beat the raised point E, as shown in Figure (a). If all four sides are slightly curved, you can beat the protrusion outward or inward, respectively. When the size error is not too large, the size can be corrected by the hammering method, the frame is erected, and the longer-side ends are hammered to shorten the total length. If angle B and angle D are less than 90°, use the method shown in Figure (b) to tap point B to expand it.